Liniers lineage is from Argentina and dates from 1753. With regards to descendants from Burgos, Santiago de Liniers y Gallo-Alcántara, I Count of Liniers, stands out.

He was born in 1842 and he was the son of Mariano-Tomás de Liniers y Sarratea and Cartina Gallo Alcántara y Thomé. He was a remarkable figure in Spanish politics. He joined Carlism at a very young age and defended it in several articles published in the newspaper “La Gorda”. He also collaborated in “La Margarita” and “La Esperanza”.

When the ‘Bourbon Restoration’ began, he left the Carlist ranks and founded, together with several collaborators, the “Catholic Union” newspaper, which supported the Catholic-liberal political movement led by Antonio Cánovas del Castillo.

He was senator for Burgos in 1893 and between 1898 and 1899. He was also civil governor of Madrid between 1899 and 1900, and from his position as Academician of the Language he was part of the  commission for the reform of the dictionary.

He married María Teresa Muguiro y Cerragería, an important figure, who were the link between the two families, The Liniers and The Muguiro, due to the fact that she was the sister of Francisca Muguiro y Cerragería, who in turn married her cousin, Juan Muguiro y Casi. Later, both of them will be the promoters of the construction of the “Palacio de la Isla”.

The Liniers family’s palace was built by Santiago de Liniers, and was designed by the architect Arturo Mélida, in Lavadores Street, in 1879. He died May 12, 1908.

Juan Muguiro y Casi was the youngest of five children, born in San Sebastian on June 16, 1853. He studied law, but worked as a banker all his life.

He was appointed “Gentleman of the Chamber” of His Majesty King Alfonso XIII, on 22 January 1892, for having welcomed his Majesties and Highnesses to the “Palacio de la Isla” on the occasion of their visit to Burgos, following the railway accident in Quintanilleja the previous year. He belonged to the Conservative Party and died on 14 November 1917.

He married his cousin Francisca Muguiro and Cerragería and they would both carry out the construction of the “Palacio de la Isla” on January 16, 1882 until its complete construction in  December of that same year.

The period of the ‘Restoration’, a period of reference in the construction of the Palace, was characterised by the reign of Alfonso XII (1875-1885) and later of Alfonso XIII, and the alternation of the conservative parties of Cánovas and Liberal de Sagasta.

At that time, Burgos experienced a great urban development, which meantthe growth of the population of Burgos.

Already in 1881, Juan Muguiro y Casi started his plans for the construction of the Palace. To this end, the first was the purchase of an estate on the “Paseo de la Isla” owned by María Rojo Ortiz, a widow and native of Burgos. Once the documents of sale were signed, Muguiro’s lawyer, Juan García Sierra, went to the Town Hall to request the building permit, which was granted by the Works Section of the Town Hall in 1882.

On January 16 of the same year, the construction of the building began. At the beginning of December 1883, the construction works were completed. In 1884, work was resumed on the enclosure of the stable walls and depot and in 1885, specifically on 25 November, King Alfonso XII died.

Miguel Ángel Muguiro, who was the third son of The Muguiro family, was born in 1880. In 1917, he married María Guillamas Caro, but hey din not have children. He died in in 1956.

He used to spend summer holidays in Burgos, in the “Palacio de la Isla”. In 1938, he was sent to Budapest (Hungary). There, as diplomatic,  he saved many Jews persecuted by the German government of Miklós Horthy.

To act in their favor, Muguiro rescued an old decree promulgated by Primo de Rivera in 1924. According to that decree all the Sephardi Jews will immediately obtain Spanish nationality. However, this decree expired in 1931, but Muguiro used it, anyways, to try to save the life of the Sephardi Jews in Hungary.

Also, he interceded to save a group of 500 children whose destination were the gas chambers in Poland. He got everyone a passport and he sent them to Tangier, which in those days was a Spanish colony.

All these actions gave him a very bad reputation among Hungarians and Germans, who wanted him to be dismissed. Once that happened, his place was occupied by the Embassy secretary, who were also involved in the rescue of persecuted Jews. His name was Angel Sanz-Briz.

In 1940, Miguel Ángel Muguiro was awarded with the ‘Grand Cross of the Order of Isabella the Catholic’. And in 2000, he was rescued from oblivion when the Ministry of Foreign Affairs of Spain dedicated a web page to its memory called ‘Spanish diplomats during the Holocaust’. Later, in 2007, he was honored again in an exhibition entitled “Visas for freedom” organized by Casa Sefarad in Madrid. 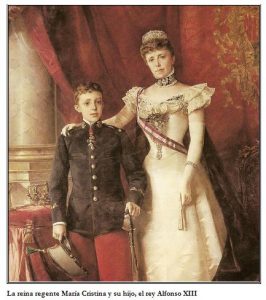 On May 31, 1906, Alfonso XIII married the British Princess Victoria Eugenia of Battenberg (1887-1969), daughter of Prince Henry of Battenberg and Princess Beatrix of the United Kingdom. He tried to regenerate the country after the disaster of 1998, which meant the loss of the last Spanish colonies (Cuba, Puerto Rico and the Philippines).  He also had to face various problems such as the war in Morocco, the workers’ movement and Basque and Catalan nationalism.

As a solution, the military man Primo de Rivera, with the king’s support, led a ‘coup d’état’ in 1923, establishing a dictatorship that won certain victories: the war in Morocco ended, social order was restored and public works were developed.

However, in 1930 the king tried to restore constitutional order, but the municipal elections of April 12, led to the proclamation of the Second Republic. The king was forced into exile in Rome, where he lived for 10 years, and where he died on 28 February 1941.

The king visited several Spanish provinces during his reign. Among the provinces to which he travelled, the visit to Burgos on 23rd September 1891, on the occasion of the terrible railway accident between Burgos and Quintanilleja stations, stands out.

The magnitude of the tragedy was such that the queen regent, María Cristina, the king, still young to reign, Alfonso XIII and the Infantas María de las Mercedes and María Teresa, went to Burgos to attend a Requiem mass in the cathedral on 13 October 1891 for the victims of the accident.

Previously, the chief inspector of the royal palaces, Count of Sepulveda, accompanied by the commissions appointed for the purpose of preparing the necessary accommodation for their Majesties and Highnesses, visited certain public buildings where the royal family could stay, without finding any that would be suitable.

Therefore, Santiago de Liniers and Juan Muguiro placed the “Palacio de la Isla” at the disposal of the Count of Sepulveda. After visiting him with Francisca Muguiro, the Count was completely satisfied and the Palace was chosen as his royal residence during his stay in Burgos, while the Muguiro family themselves moved to the hotel of their relatives, the Counts of Liniers. This stay was an immense honor for the Muguiro family, and was embodied in a tombstone at the entrance of the building.

He was born in Ferrol on 4th December 1892. In 1907, at the age of 14, he began a meteoric military career that culminated in his appointment as lieutenant colonel by Sanjurjo for his work in Melila.

Before leaving Morocco, on January 11, 1923, the commander general of Melilla imposed the “Individual Military Medal” on Franco in a ceremony in which the three flags of the Legion were present. When he returned to the Peninsula to join his old regiment in Oviedo. On October 13, 1923, he married Carmen Polo.

In the midst of a democratic political regime incapable of improving the situation in the country, on September 13, 1923, General Primo de Rivera carried out a ‘coup d’état’, which triumphed and led to a dictatorship that would last until 1930. Later, in 1931, the Second Spanish Republic was proclaimed.

Although Franco did not sympathize with the Republic, he agreed with the right-wing government established after the 1933 elections. However, the corruption of this government was evident years later and the 1936 elections gave victory to the Popular Front, a coalition of leftist parties. Faced with this situation, Franco saw his opportunity to lead a ‘coup d’état‘ that would end up leading to the Spanish Civil War (1936-1939) and the establishment of the Franco dictatorship until 1975, the year of Franco’s death.

During the Civil War (1936-1939), the “Palacio de la Isla” became the residence of the “Caudillo”. On the ground floor were located the offices of the “Generalísimo” and his assistants, the waiting room, the dining room and the house’s services.

On the first floor, were placed the Franco family’s rooms, the dressing rooms, a living room and the bathroom. At the top, the General Staff had its offices.

He lived in the Palace from August 10, 1037 to October 18, 1939, with his family and the family of his brother-in-law, Ramón Serrano Súñer, married to Zita Polo Martínez-Valdés.

On April 1, 1939, the last report of war was  signed by Franco himself. With its reading on Radio Castilla (now Radio Nacional de España) the war was over.

When the war ended, the Franco family moved to Madrid, where they had their habitual residence, but the Town Hall and the Provincial Council of Burgos, organizations that had acquired the Palace from Muiguiro’s widow on June 5, 1939, wanted to give it to him. Finally, it was decided that the Palace would serve as a temporary residence during his stays in Burgos, which were frequent until 1961. Franco died in Madrid on November 20, 1975.

Ramón Serrano Súñer was born on September 12, 1901 in Cartagena. He married Zita Polo, sister of Carmen Polo, wife of Franco, which is why he is popularly known as “Cuñadísimo”. He was a politician affiliated with the national side during the Civil War and one of the greatest exponents of the regime after it.

Between 1938 and 1942 he was Minister of the Interior and Foreign Affairs, as well as President of the Political Board of the Traditionalist Spanish Phalanx and of the JONS. He was also behind the foundation of the ONCE and the EFE Agency.

After the Civil War, Serrano Suñer was one of the most prominent personalities of the regime. On September 1, 1939, the Second World War broke out. Serrano did not agree with Spain’s neutral position on the war and on October 23, an interview took place between Franco and Hitler in Hendaye to negotiate Spain’s entry into the war. However, after this meeting, Spain was left out of the war.

On June 21, 1941, Hitler broke the friendship pact with Moscow and launched 200 divisions against the Soviet Union.  As Minister of Foreign Affairs, on 24 June, Serrano Súñer delivered the famous speech from a balcony of the General Secretariat of the Movement, located in Calle Alcalá, Madrid:

“Russia is guilty! Guilty of our civil war. Guilty of the death of José Antonio, our founder, and of the death of so many comrades and soldiers killed in that war by the aggression of communism. The extermination of Russia is a requirement of Europe’s history and future.

Such a speech provoked a great stir among the Spanish population and within the party.  In this context, the attack on the Basilica of Our Lady of Begoña (in Bilbao) on August 15, 1942, by a group of Falangists, was considered an attack on the military establishment.

The Minister of the Interior and the Undersecretary of the Presidency, Luis Carrero Blanco, urged Franco to dismiss Serrano. Finally, on September 3, 1942, Serrano Suñer was removed from the Ministry of Foreign Affairs and from the presidency of the Political Board of the Traditionalist Spanish Phalanx and the JONS.

From then on, family relations between Franco and Serrano and their respective families cooled down considerably. He died in Madrid on 1 September 2003.